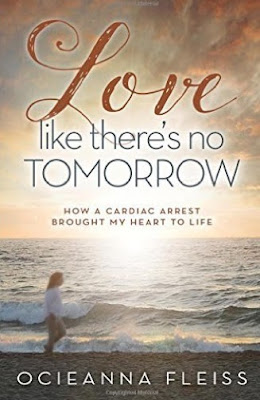 Everybody dies. The thing is, most of us don't get the chance to write about it later. Ocieanna Fleiss did. In Love Like There's No Tomorrow: How a Cardiac Arrest Brought My Heart to Life she tells the story of her death and recovery.

Ocieanna's died on a Saturday night. Her heart stopped for over ten minutes. Although the medical team got it started again, they held out little hope for her survival. Despite the odds, God brought her back to full health.

But that is only part of the story. Through Love Like There's No Tomorrow I met a delicate child who struggled to find her place in the world and in her family. I watched her grow into a young woman whose purpose in life was to earn God's favor. I saw a beloved wife and mother who was stressed and overwhelmed by life's demands. The cardiac arrest was the beginning of a a healing that "brought her heart to life" in ways she had never before experienced. It propelled her into God's glorious grace.

Ocieanna's unique writing voice combines beautifully with her responsive heart to God's deep work in her life. Her story is one of hope for all who are former—or even current—legalists, for those who constantly feel the strains of life, and for all who long to be at rest in the Lord. I'm guessing that's pretty much all of us!

Meet her for yourself at her website, Ocieanna.com, where you can read the first three chapters of Love Like There's No Tomorrow, find a link to purchase any of her four books, browse her blog, or invite her to speak to your group.

Posted by Ginger Kauffman at 8:50 AM No comments:

Voices From the Past

Today I'm sharing this story, originally posted on February 2, 2010, because it reminds me of my big brother, Tommy, and gives a glimpse into our dad's sweetness. Even now, at 90, I Dad's sweetness and love remain strong. Happy Father's Day, Papa.

I couldn't pronounce my r's when I was little. I called myself "Gin-juh" and my baby sister "Glowia." I must have been about four and my brother Tommy five when he decided I needed a little coaching. I'm told the conversation went something like this:

When I was digging through the boxes of childhood treasures in our garage in December, I came across a small canister. Thinking it strange that someone had saved an old can of shoe polish, I pulled it out and discovered a small yellowed note taped to the top which read, "Us at home, Nov 23, 1954." It was a wire recording! We found a man in Seattle to transfer the recording to CD and just last night were able to give my parents their belated Christmas present.

On the recording, Dad played the part of Art Linkletter and told us we were on his "Houseparty" radio program. He asked us questions about ourselves -- names (Tommy and Gin-juh), ages (five and fo-uh), what our parents did (Daddy was a nol'um layer [linoleum layer] and Mama didn't work but she liked to read), who was the boss at our house (of course the answer was our Daddy!). Tommy said George Washington was the smartest man in the world, and his wife was the smartest woman. I said the prettiest woman in the world was Mrs O'Brien! No one at the table had any idea who Mrs O'Brien was, but she must have been gorgeous. Already I had two boyfriends -- Chuck and Leroy. Tommy thought it would be fun to be a zraff(giraffe) so that he could watch the fireballs, and for no reason I could come up with, I wanted to be an ow-uu (owl). In an attempt to get five-month-old Gloria to talk, we made her cry instead.

Tommy and I did a lively rendition of "I Love to Go to Sunday School," then Dad and I sang "Whisper a Prayer" with Tommy, this time Tommy singing the harmony to Dad's and my melody. Tommy was undisturbed by my attempt to find the right note or even by the melody that Dad was singing as he harmonized high above us. I'd forgotten how naturally music came to him.

Our family didn't own a recorder or camera during our early days, so this find is especially precious to us. Tom and I were glad to get it back from being transferred while my brother Ted, who was passing through on his way back to Juneau, and Peach (that is, Glowia) were both available to hear it too. Tim, check the mail. Your copy will be there in a couple of days.

Now where did we put that cassette of our boys when they were preschoolers?

Posted by Ginger Kauffman at 8:35 AM No comments: