You want to know what's really weird? Joseph is missing from two of my other nativities as well! Can you really have Christmas without Joseph?

Joseph gets very little press in the Scriptures. Did you know that he doesn't utter one word in the entire Bible? Although he never speaks, we know enough about Joseph from what is said about him to see that he is fit to be the human father of the Son of God.

Joseph was compassionate, and not rash. When he learned of Mary's pregnancy he did not take quick action to protect his reputation. His concern was for Mary's well-being more than his own. He did not want to expose her shame publicly and decided it would be best to divorce her quietly.Joseph was open to God and was able to recognize his voice. On four separate occasions the Lord used dreams to give Joseph very specific direction.- In the throes of deciding what to do about Mary, an angel came to him in a dream. Do not be afraid to take Mary as your wife, the angel instructed (Matt 1:20).- When Herod sought to kill Jesus, the Lord interrupted Joseph's sleep with these words, Get up, take the child and his mother and escape to Egypt (2:13);- Once Herod had died the Lord appeared to Joseph in a dream and said, Get up, take the child and his mother and go to the land of Israel (2:20);- But Joseph was afraid, because Archelaus, Herod's son, was now in charge. Having been warned in a dream, he withdrew to the district of Galilee (2:22).Joseph was quick to obey. In response to each dream, he took action. He trusted God so much that he recognized His voice and promptly did what he was told.Joseph was faithful. He took the law seriously when he wrestled with Mary's dilemma; he went to Bethlehem for the census (Luke 2:21); he had the boy circumcised on the eighth day and named him Jesus (2:21); he presented Jesus at the temple in Jerusalem and sacrificed to the Lord (2:22-24); he did everything required by the Law of the Lord (2:39); and he made the annual trip to Jerusalem to celebrate the Feast of Passover (2:41).Joseph was a faithful father. He surely was tender with Mary during their trip to Bethlehem and the birth of Jesus. Did he think it strange that this Son of God was born in a stable and had only a manger for a bed? Or that their visitors were poor shepherds and rich sages? He marveled at Simeon's words at Jesus' dedication and would later be astonished to see people's reaction to the twelve-year-old Jesus.Jesus was obedient to his father. Luke tells us that after Mary and Joseph found Jesus in the temple he went down to Nazareth with them and was obedient to them (2:51). Jesus had the example of Joseph's obedience to all the law to teach him how to be obedient both to his human parents and his Heavenly Father (John 8:29, Heb 5:7-10).We read in Luke, just prior to the genealogy of Jesus, this astonishing statement: Now Jesus himself was about thirty years old when he began his ministry. He was the son, so it was thought, of Joseph (3:23). We don't know how old Joseph was when he died, but from the time the angel appeared to Mary until his final breath Joseph was thought to be the father of Jesus.  "Isn't this Joseph's son?" the people asked when they heard the gracious words that came from [Jesus'] lips (Luke 4:22).

Only a righteous man could have filled Joseph's role as a human father to the Son of God. In the cast of Christmas characters, the part played by Joseph is vital. The strong, silent Joseph is just the man for the role. Take him out of the story and you'd have a gaping hole.

In Luke's rendering of the Christmas story we are introduced to three ladies in waiting -- Elizabeth the mother of John the Baptist, Mary the mother of Jesus, and Anna the prophetess.Upright and blameless.  That describes Elizabeth, wife of Zechariah the priest. For many years she had longed for a child of her own, but they were now old, and she was barren.Her husband had been chosen to go into the temple of the Lord and burn incense.  This once-in-a-lifetime opportunity for a priest put Zechariah in the very presence of God.  While serving, an angel appeared to him and said, "Do not be afraid, Zechariah; your prayer has been heard.  Your wife Elizabeth will bear you a son and you are to give him the name John" (Luke 1:13).Zechariah questioned the words of the angel. "How can I be sure of this?  I am an old man and my wife is well along in years."  Because of his doubt, he was struck dumb and would not speak until the birth of his son.  But after long years of waiting, Elizabeth accepted the news with joy. "The Lord has done this for me... In these days he has shown his favor and taken away my disgrace among the people" (1:25). 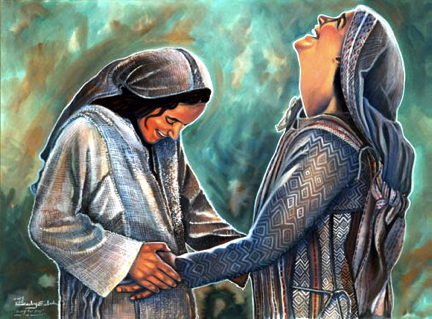 Elizabeth's cousin, Mary, was young, maybe only 13 or 14.  She was engaged to Joseph, a carpenter.  When an angel appeared to her, telling her that she would bear a son, the Son of the Most High, she humbly accepted his words.  She said, "I am the Lord's servant.  May it be to me as you have said" (1:38).

Mary's waiting had just begun. As the story unfolded and the child was born, shepherds, wise men, and an angry king all became part of her life. We are told that "Mary treasured all these things and pondered them in her heart' (2:19). Until her final breath, she would wait to see what God would do through the life, death, and resurrection of her son.

And then there's Anna. She was not just old, she was very old. Widowed after only seven years of marriage, she was now 84. The Scripture says that she never left the temple but remained there night and day, worshipping God, fasting, and praying. When Joseph and Mary presented Jesus at the temple, Anna was there. "Coming up to them at that very moment, she gave thanks to God and spoke about the child to all who were looking forward to the redemption of Jerusalem" (2:38). Her waiting was over. 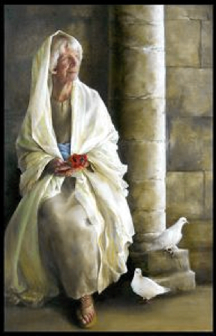 We wait in hope for the Lord;
he is our help and our shield.
In him our hearts rejoice,
for we trust in his holy name.
Psalm 33:21

This post originally appeared on December 14, 2011.
Posted by Ginger Kauffman at 6:37 PM No comments: