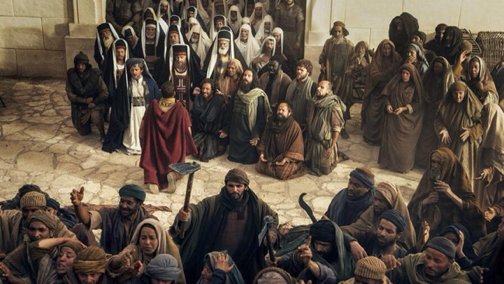 Recently I read the story of Jesus before Pilate. It was early on Friday morning of Holy Week. The religious leaders had arrested Jesus, tried him, and found him worthy of death. Because execution was forbidden for Jews, they took him to stand trial before Pilate.

After questioning Jesus, Pilate was convinced of his innocence. However, the religious leaders had aroused the crowds, and Pilate was afraid of them. "What shall I do with Jesus?" Pilate asked the people. "Crucify him!" they cried. Ignoring his own convictions and his wife's pleas for Jesus's life, he washed his hands of any guilt and released Barabbas, "the man who had been thrown into prison for insurrection and murder, the one [the crowds] asked for, and surrendered Jesus to their will" (Luke 23:25).

What a chilling thought, that the holy Son of God would be surrendered to the will of an angry mob.

I noticed a handwritten message in the margin of my Bible, pointing me back a chapter to Luke 22:42. We see Jesus in the Garden of Gethsemane on Thursday night, just hours prior to his trial before Pilate. Hear him pray: "Father, if you are willing, take this cup from me; yet not my will, but yours be done." 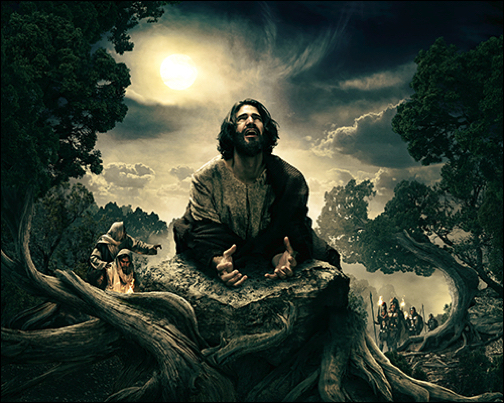 This is how we, too, can be equipped for those experiences where we seem to have no control of our situation. Perhaps it is illness or a broken relationship, or maybe it is financial strain or the grief over a loved one's death. If we have submitted ourselves to the Father's will we can rest in His loving hands. Surrendered to God, we need not be afraid of "the will of the crowd" concerning us.


In God, whose word I praise—
in God I trust and am not afraid.
What can mere mortals do to me?
Psalm 56:4

Posted by Ginger Kauffman at 2:20 PM No comments:

In Time of Trouble 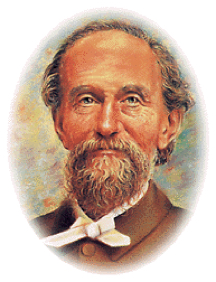 When South African pastor Andrew Murray was visiting England in 1895, he began to suffer pain from a previous back injury. While he was recuperating, his hostess told him of a woman who was in great trouble and wanted to know if he had any counsel for her. Murray said, "Give her this paper which I have been writing for my own [encouragement]. It may be that she will find it helpful." This is what Murray wrote:

"In time of trouble say:

God will keep us by His love. By His grace, we can rest in Him.

First—God brought me here. It is by His will I am in this strait place. In that I will rest.

Next—He will keep me in His love and give me grace in this trial to behave as His child.

Then—He will make the trial a blessing, teaching me lessons He intends me to learn, and working in me the grace He meant to bestow.

Last—In His good time He can bring me out again—how and when He knows.

I am here—by God's appointment, in His keeping, under His training, for His time."

This story is from David Jeremiah's book, What to Do When You Don't Know What to Do and appeared recently in Our Daily Bread.
Posted by Ginger Kauffman at 6:40 AM No comments:

When the sun breaks through a rip in the clouds and floods the vistas with golden light, heads go up and lungs expand. It's like a mini-vacation, a kiss of beauty from the heavens, a note of encouragement that brighter days are coming.

~ Joan Husby, in the introduction to her blog, Sun Breaks


We've had record-breaking rainfalls this winter. Rain has come to us in buckets and sheets, and even a few cats and dogs. Yet we've had enough sun breaks these past three months to keep us from total madness.

In the past week Tom and I have taken advantage of these rare moments and gone out with our cameras in search of some beauty. We didn't have to go far. The photos below were all taken within twelve miles of our home.

Bonhoeffer Botanical Gardens, located at Freeborn Lutheran Church on 300th St NW, east of I-5 at exit 218, is clearly visible from the freeway. A work in progress, this gardens will eventually showcase a thousand plants native to the Pacific Northwest. With beautiful boardwalks, educational kiosks, grasses growing on the roofs, and native habitats, people will come from miles around to enjoy this marvelous botanical gardens.

Workers were at the park while we explored, preparing the security system for the many glass pieces that will be on display, creations of artists from nearby Pilchuck Glass School. 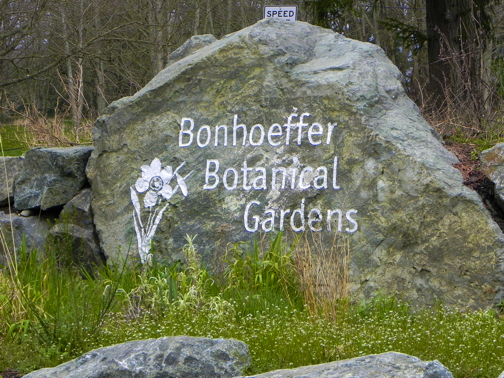 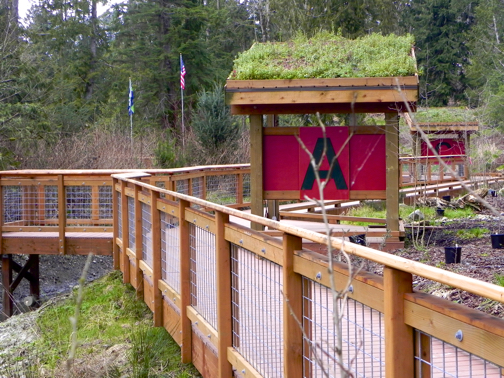 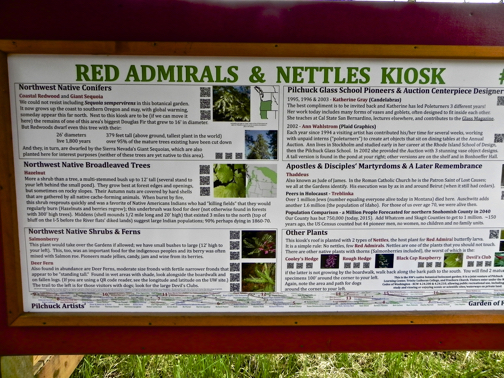 Cama Beach State Park on Camano Island has much to offer visitors but nothing more appealing than the warm sunshine and these apple blossoms that greeted us. 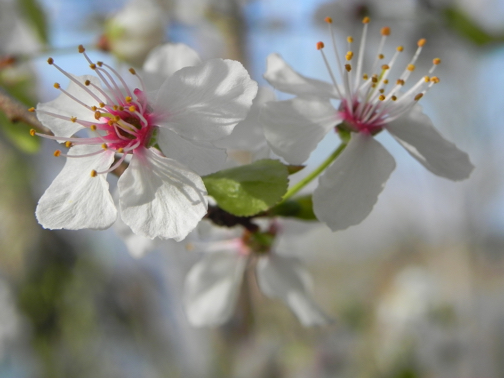 We wanted to check for eagles on Thomle Road, just off Marine Drive. Shortly after we turned on Thomle Road we saw an eagle sitting on a branch, not too far from his nest. Down the road we discovered two more adult birds and another nest, And then there were the cherry trees laden with blossoms in the late afternoon sun. 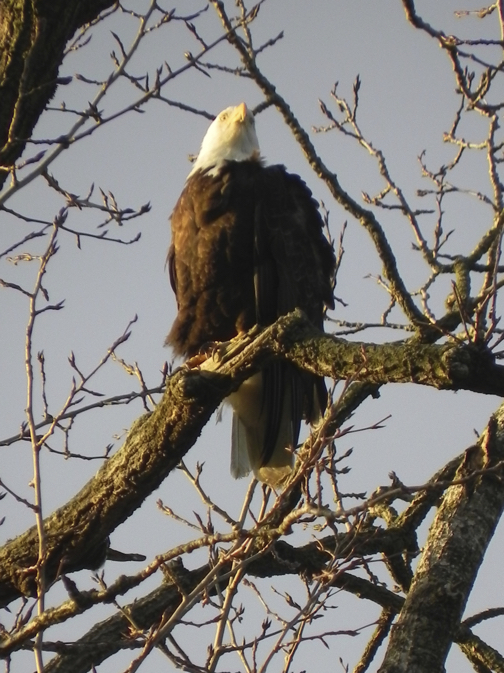 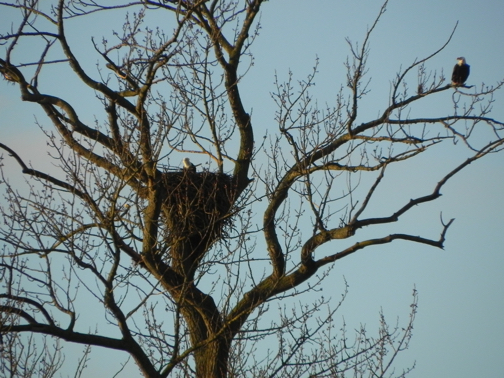 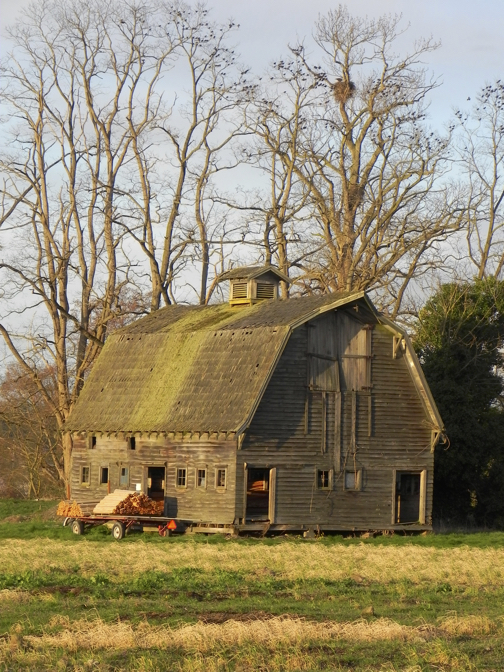 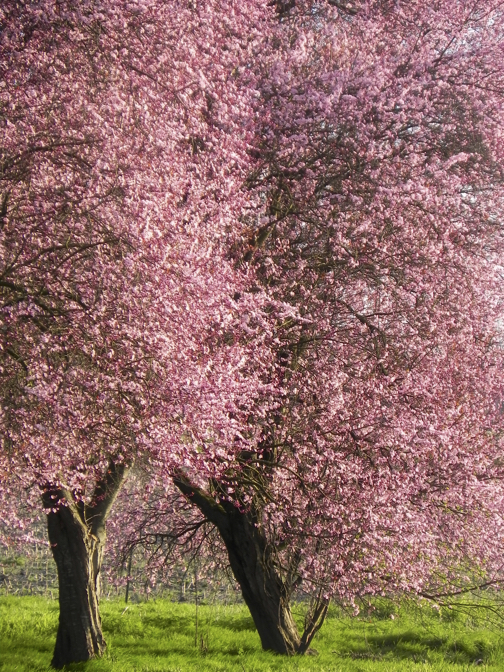 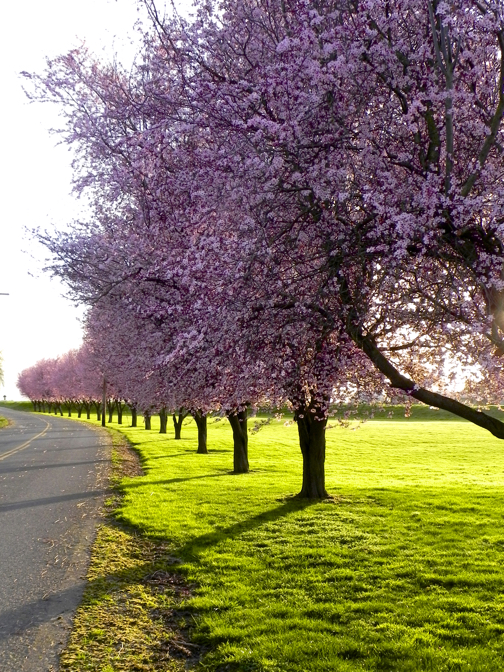 The forecast is for several more days of rain. Perhaps we'll get a few sun breaks. But even if we don't, the heavens have given us a kiss of beauty, and it's enough to keep me going until Spring is here to stay.
Posted by Ginger Kauffman at 2:40 PM 6 comments: